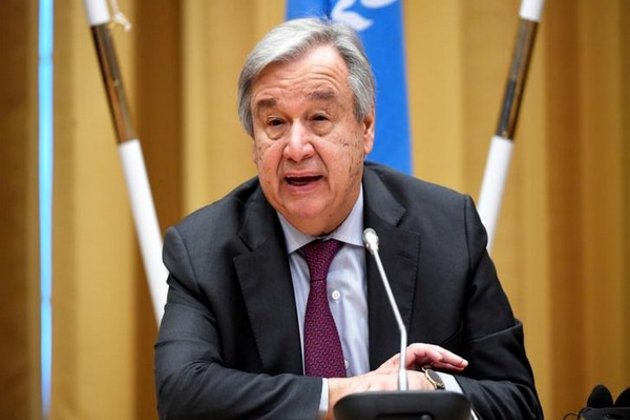 New York [US], January 22 (ANI): UN Secretary-General Antonio Guterres on Friday raised five alarms for the world for 2022 and urged countries to forge a new, more hopeful and equal path at a time when "the only certainty is more uncertainty".

"We face a five-alarm global fire that requires the full mobilization of all countries," he said, referring to the raging COVID-19 pandemic, a morally bankrupt global financial system, the climate crisis, lawlessness in cyberspace, and diminished peace and security.

He stressed that countries "must go into emergency mode", and now is the time to act as the response will determine global outcomes for decades ahead, UN News reported.

Stopping coronavirus spread must be at the top of the agenda everywhere, said Guterres, calling for countries to "go into emergency mode in the COVID-19 battle."The pandemic has also highlighted the failure of the global financial system, on which Guterres was particularly blunt. "Let's tell it like it is: the global financial system is morally bankrupt. It favours the rich and punishes the poor."The system is supposed to ensure stability by supporting economies through financial shocks, such as the pandemic, but he said the lopsided investment is leading to lopsided recovery from the crisis.

As a result, poorer countries are experiencing their slowest growth in a generation, while middle-income nations are denied debt relief despite surging poverty levels. Most of the world's poor are women and girls, who are paying a high price in lost healthcare, education and jobs, the UN chief added.

"The divergence between developed and developing countries is becoming systemic - a recipe for instability, crisis and forced migration. These imbalances are not a bug, but a feature of the global financial system," he said.

For the Secretary-General, countries have no choice than to to go into "emergency mode" against the climate crisis. The world is far off-track on limiting global temperature rise to 1.5 degrees above pre-industrial levels, as outlined in the Paris Agreement on climate change.

Global emissions must be reduced by 45 per cent by the end of the decade to reach carbon neutrality by mid-century, which requires "an avalanche of action" in 2022.

All developing and developed countries that are major emitters must do more, and much faster, he said, taking into account common but differentiated responsibilities.

While technology offers extraordinary possibilities for humanity, Guterres warned that "growing digital chaos is benefiting the most destructive forces and denying opportunities to ordinary people."He spoke of the need to both expand internet access to the nearly three billion people still offline, and to address risks such as data misuse, misinformation and cyber-crime.

"Our personal information is being exploited to control or manipulate us, change our behaviours, violate our human rights, and undermine democratic institutions. Our choices are taken away from us without us even knowing it", he was quoted as saying by UN News.

The UN chief called for strong regulatory frameworks to change the business models of social media companies which "profit from algorithms that prioritize addiction, outrage and anxiety at the cost of public safety".

Guterres underlined the UN's commitment to peace, pledging to spare no effort in mobilizing international action in numerous areas across the globe. (ANI)