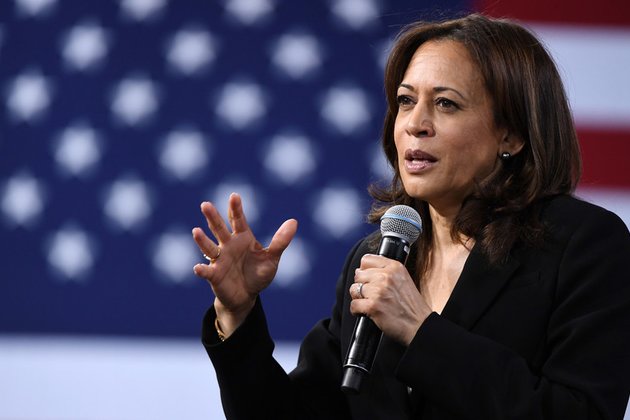 Kamala Harris 2.0: Five ways the US veep can reboot her reputation

This week offered a rare glimpse of Joe Biden and Kamala Harris exuding supreme confidence in the Oval Office amid a gaggle of journalists. The picture of strong and determined leadership did not occur in Washington, DC, however, but at Madame Tussauds' Wax Museum in New York where life-like replicas of the two have been immortalized for posterity. It's arguably the best the Democratic duo has ever looked together.

Currently, there appears to be a heated race underway between Biden and Harris as to who can become the least popular with the American people. Thus far Harris enjoys a comfortable lead, but the president is not far behind.

This double whammy of disdain is bad news for the Democratic Party, which had assumed Harris would be a natural replacement for her boss in the event of his untimely departure from politics. Biden, 79, is the oldest president in US history and it remains questionable whether he will run for a second term in 2024. Harris' future political career is also uncertain, however, and a new communications director, Jamal Simmons, has been called in to restore her sagging status.

With those thoughts in mind, here are five things that Harris may wish to consider doing to bolster her image with voters

Perhaps the most crucial thing that separates the world's great leaders from the mediocrities is charm and likability. The Democratic President Jimmy Carter, for example, may have exceeded his Republican rival Ronald Reagan in terms of sheer intelligence, but the Hollywood actor turned politician always outshone his predecessor with nothing more than a smile and a wave. These are ineffable qualities that are difficult to teach; statesmen are either blessed with them or not. Currently, Harris is trying hard to ascend Charisma Mountain but her mannerisms, body language, and conversation do not project a presidential image.

This was painfully clear in October during a NASA-sponsored discussion on the solar system where Harris came out looking like she'd just emerged from a UFO in front of her young audience. Some of the blame for this mishap could be put on the White House staff for allowing the vice president to participate in such a contrived conversation, which actually employed child actors. Harris' artificial efforts to match the giddiness of the children, reciting their scripted lines with no small amount of overacting, ended in a PR disaster.

To give Harris the benefit of the doubt, these are difficult times - in the midst of a pandemic with much of the petrified population masking and social distancing - for a politician's personality to truly shine. And, although Joe Biden successfully campaigned against Donald Trump from his basement, Harris needs to buck the current trend of politicians isolating themselves from their constituents. The vice president, in order to demonstrate that she has more life and vitality than her waxen figure now on display in Tussauds, must venture beyond her comfort zone and mingle with the public. If that requires delivering fist bumps and kissing a million crying babies for the camera, then so be it. Kamala Harris must put her natural, human side on display (or at least make a better go of pretending) to connect with voters.

2. Call out the criminals

The one thing that can sink political ambitions faster than an imploding economy is the feeling that the streets are no longer safe. After all, who cares about the price of gasoline when just venturing outdoors can get you killed? Yet, for many, America's cities have felt less safe than ever during the Biden-Harris administration's first year in power.

In 2021, a dozen major US cities smashed their annual homicide records. Shockingly, these new trendsetters were not the famous murder capitals, like New York City, Chicago, and Los Angeles, as might be expected, but rather the mid-size urban areas. Philadelphia, for example, a city of about 1.5 million people, clocked more homicides last year (560) than the nation's two largest cities, New York and Los Angeles. What that means is that Americans from all walks of life are now being exposed to the horror of homicide.

A conspicuous footnote to the ongoing carnage is that the 12 cities that broke their homicide records last year are all run by Democrats. Although Kamala Harris cannot be blamed for that, as a liberal she does bear some responsibility. The Democratic Party, in response to the murder of George Floyd in 2020 by a white cop, cheered on a 'defund the police' campaign that gained lot of momentum from the radical progressives in the party, despite dire warnings from some more senior (and sensible) Democratic members.

Harris needs to disassociate herself from that movement and align herself with the moderates inside her party, like Senator Joe Manchin of West Virginia, who early on summed up the anti-police movement by saying, "You can't defund the police, that's stupid, it's crazy and anyone who talks about that is nuts."

With violence exploding on the streets, and Americans craving some semblance of security, that is the no-nonsense stance Harris will need to embrace if she hopes to be taken seriously as a future presidential candidate. As a former district attorney, she should already know this.

3. Shore up the economy

While Joe Biden likes to boast that the US economy has roared back to life on his watch, what he always fails to mention is that a large part of the recovery occurred under Donald Trump. Moreover, after a loss of millions of jobs and growth due to Covid-19 lockdowns and mandates, many of them put in place by Democratic mayors and governors, there was only one direction left for the battered US economy to go, and that was up.

Despite all of this sugar-coated talk about a robust American economy powering ahead, there are some very unsettling things happening - or rather not happening - behind the glowing reports. Aside from a record trade and budget deficits, consumers across the country are beginning to notice something rarely seen before: gaping holes on their store shelves where products once stood. In the capitalist land of plenty, this is almost unheard of.

Americans are witnessing the early stages of supply chain disruptions and inflationary pressures that only promise to worsen over time. Presently, over 100 ships remain stuck off the Pacific coast, unable to unload their cargo. Meanwhile, starting on January 22, truckers from Canada and Mexico arriving at the US border must be fully vaccinated to enter the country. This will only compound the supply chain crisis. Here is a golden opportunity for Kamala Harris to nip a disastrous situation in the bud.

Since the Supreme Court has blocked President Biden's vaccine mandate for businesses, Harris could go rogue, as it were, and suggest that truckers and port workers also be exempt from the mandates. Desperate times call for desperate measures, and at this point in her career Harris must be willing to take some tough decisions that will pay off handsomely at the ballot box. Whether or not she has the freedom and courage to act outside of the executive box is another question.

Arguably the worst decision of Kamala Harris' first year in office was her failure to visit the US-Mexico border during the worst moments of the migrant crisis. While the country was grappling with a record number of illegal crossings - estimated to be about 1.72 million - Harris finally decided to visit the border - 94 days after the White House placed her in charge of the situation. In the middle of a pandemic, such conspicuous inaction was almost unforgivable, especially since illegal migrants were being shuffled around the country shortly after arrival. To make matters worse, Harris only announced her decision to visit the border a week after former President Donald Trump said he would visit the region.

Next week, Harris is scheduled to appear in Honduras to attend the inauguration of Honduran President-elect Xiomara Castro. This would be a good opportunity to revisit the US-Mexican border - possibly for more than just one day - in an effort to dispel those lingering memories of Harris' regrettable detachment from her first major crisis.

5. Put the woke monsters to bed

The Democratic Party suffered a major setback last year when Glenn Allen Youngkin, a former business executive, became the first Republican to win Virginia's gubernatorial race since 2009. In his first day in office last week, Youngkin eliminated vaccine and mask mandates, which many in the state had criticized as unconstitutional impositions on freedom and liberty. But what really attracted Virginians to Youngkin was his defense of parents in their fight against the state over what is being taught in the public school system.

The new Virginia governor's first executive order banned the teaching of critical race theory, a highly controversial concept that blames the legacy of 'white oppression' for the perceived lack of equality in the United States today. The new governor's orders would also put an end to the teaching of transgender theory in the classroom.

Here is where Kamala Harris would do well to take notes. During the gubernatorial debates, the Democratic candidate, Terry McAuliffe, remarked that he didn't think "parents should be telling schools what they should teach." That comment was abjectly tone deaf, coming as it did amid fierce showdowns between parents and local school boards over what is being taught in the classroom.

As Youngkin's surprise victory revealed, Americans want more say over what their children are being taught in school, not less. Yet how has the political left responded to the concerns of parents being expressed at school board meetings? The National School Boards Association, which represents thousands of school officials, compared the actions of these vocal parents to "a form of domestic terrorism and hate crimes." Attorney General Merrick Garland then issued a memo mobilizing the FBI to track parents who express opposition at school board meetings.

Clearly, such an approach to democratic debate and dissent, especially from parents expressing their feelings over school policy, is no way to win elections. Harris should move to disassociate herself from these disastrous woke movements, inspired by radicals in the ranks, which threaten to destroy the Democratic Party, as well as her efforts to become the first female POTUS.

Clearly, Harris has her work cut out for her in the next three years.