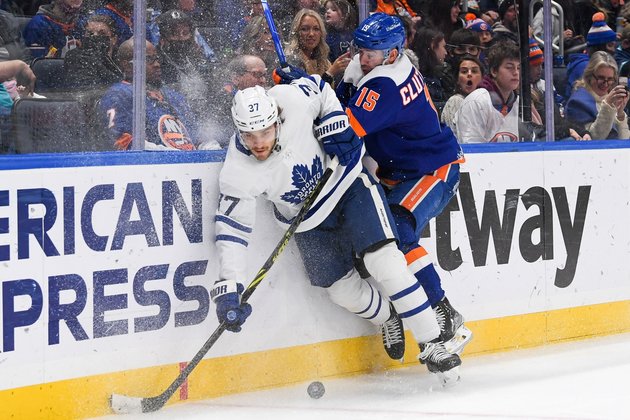 Morgan Rielly had a goal and an assist as the visiting Toronto Maple Leafs defeated the New York Islanders 3-1 Saturday night at Elmont, N.Y.

Mitchell Marner and Pierre Engvall also scored for the Maple Leafs, who completed a six-game road trip with a 3-2-1 record. Backup goaltender Petr Mrazek made 27 saves for Toronto.

Zach Parise scored for the Islanders, who had a three-game winning streak end that included a 4-0 victory over the Arizona Coyotes on Friday.

Toronto led 2-1 after one period.

The Islanders overcame two minor penalties called against them in the first five minutes of the game, then allowed Marner's short-handed goal nine seconds into their own power play.

Marner's ninth goal of the season -- and second short-handed -- came at 13:25 of the first after Rielly stripped the puck from Mathew Barzal at the Toronto blue line. Marner flubbed his shot but the puck slid past Varlamov. Marner's other short-handed goal came against the Islanders on Nov. 21 in Toronto's 3-0 victory.

Parise scored his second goal of the season at 19:00 after a long pass from the Islanders zone by Scott Mayfield. Parise chipped the bouncing puck high into the net on the backhand from the low slot.

Engvall scored his fifth goal of the season at 19:59, sliding in a backhand after New York's defensive lapse.

Rielly scored his fifth goal at 9:42 of the second period with a 16-foot wrist shot from the right circle on a pass from William Nylander.

The Islanders could not produce when Rielly was called for hooking at 7:55 of the third period.

Former Islanders great Clark Gillies, who died Friday, was honored in a ceremony before the game.

Toronto's Justin Holl and Ondrej Kase were out because of COVID-19 protocols and Jake Muzzin was sidelined with a concussion.