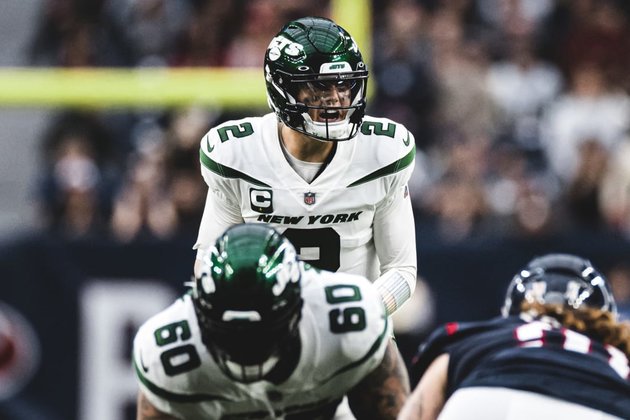 Zach Wilson thought his rookie season had ended in October. After releasing a long pass during the second quarter of the Jets' blowout loss at New England on Oct. 24, Patriots OLB Matthew Judon tackled Wilson and the rookie-signal caller bent and tumbled to the ground.

"I felt a pop and I felt the awkwardness of how he landed on me," Wilson said before the Jets finished their season in Buffalo. "The first thing that crossed my mind was, 'Oh my gosh, I can't believe this just happened.' Am I going to have to spend the next 9-to-12 months getting this thing better and rehabbing it?"

But Wilson and the Jets avoided a worst-case scenario and the first-year pro received a diagnosis of a PCL sprain. He missed four games and took time to reassess where he wasand where he was going.

"The mindset was just treating every single game like it was a new game and what had happened before didn't matter," Wilson said. "You learn from those scars, but you don't bring them along with you. You keep moving forward. I almost felt like I was able to reflect, almost like you do after a season, and I was able to do that partway through this season. It gave me the ability to say, 'OK, how can I go into this second half of the season for me and completely treat it like it's a new season. Like it's Year 2 for me now. How can I apply what I learned in year one and try to get better every single day."

After six NFL starts, Wilson was allotted time to self-scout and he took advantage with the help of John Beck. And in addition to analyzing his initial NFL action, Wilson was able to watch backups Mike White, Joe Flacco and Josh Johnson all have success moving the ball and putting up points in games against the Bengals, the Colts and the Dolphins.

"We just spent time in the QB room and got to watch every play that I had gone through and all the different situations I was a part of," Wilson said. "Watching Joe and Josh and Mike all play, I got to put myself in their shoes and saw what things they did well, what things could they have done better and how did they approach this. In the long run, I felt like it helped me approach it from a different perspective and almost settle in and say this is how I can rewrite my process of how I handle things."

"Early on it was really tough for me to say I'm playing within this offense and I'm going through my reads," Wilson said. "And then it was also tough to say I got to play football the way I know how to play football and make those off-schedule plays. It was really just finding that balance of when it's OK to take off and when to make a play out of something or if I need to hang out in the pocket and take a hit and deliver a good ball.

"I feel like these last couple games of just having that ability to just diagnose what's going on, read with my feet, and then if something's not there, just be able to take off naturally with my offense and just try to make a play. Really I just think it comes back to playing loose, playing free and just being confident out there as well."

While Wilson's best professional game was his 234-yard, 1 TD effort against the Buccaneers while nearly leading his team to an upset win over Tom Brady's Buccaneers in Week 17, he first wowed Jets fans in the team's 27-24 OT win over the Titans in Week 4. The No. 2 overall selection in last April's draft got hot in the second half and in overtime, delivering explosive pass plays in the pass game to the Keelan Cole and Corey Davis.

"I think it was the first time all season I felt like I was just playing football finally and not playing behind the sticks or feeling like we're three-and-out and off the field and waiting for our chance again," he said. "We made some big plays off-schedule in that game, and it got some momentum going. It was the first time we were having some fun."

Wilson ended the season without his top five receivers in the second half of a 27-10 loss to the Bills as Buffalo's top-rated defense sacked him eight times. But Wilson, the centerpiece of the Jets' impressive 2021 draft class, headed into the offseason in a lot better spot than when he went to the ground in New England. The uncertainty is gone and strides were taken, but many more will be necessary in Year 2.

"Yeah, its very promising," Wilson said of the Jets '21 Class. "I am very excited for the next season. I feel like I can go into the offseason with a lot of things to work on, improve on, and get better at. I know what the NFL game is like, I know I can play in this league. It's going to be great for me and all those other rookies to just work on those things and come back and just have that confidence to build off of what we're ending with this year."