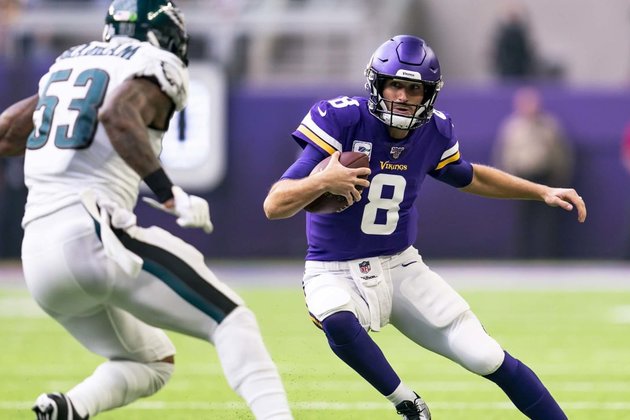 The Vikings 2022 schedule is here.

The NFL rolled out its schedules Thursday night, and Vikings fans discovered that Minnesota will open the season at home against Green Bay, host New England for a Thanksgiving Night matchup and will need to have a strong start and stronger finish.

Jeffri Chadiha of NFL.com made three observations about the Vikings schedule, starting with the fact that they'll have two tough contests out of the gate. He wrote:

The odds don't favor 0-2 teams making the playoffs, which is why the Vikings had better be ready for the opening two games. They'll host Green Bay before traveling to Philadelphia for a Monday night matchup. Momentum means plenty early.

And although Minnesota's schedule starts off with back-to-back challenges, Chadiha pointed out that, overall, the Vikings slate of opponents seems favorable.

This is the kind of schedule a team wants to see when it's transitioning to a new coaching staff. The Vikings will play 10 games against teams that missed the playoffs in 2021. Three of those opponents (Lions, Giants and Jets) were picking in the top 10 of this year's draft.

And lastly, Chadiha highlighted a game ripe with storylines that's hard to miss. The Vikings will visit the Bills in Week 10 and will need to be ready to face former Minnesota receiver Stefon Diggs.

The Vikings haven't played against wide receiver Stefon Diggs since trading him to Buffalo in 2020. The deal worked out for both franchises - Diggs has [been a star in Buffalo], while Minnesota found a stud wideout in Justin Jefferson - but this still will be a revealing matchup. The Vikings are trying to improve a horrid pass defense, and they'll be tested early and often by Diggs and Bills quarterback Josh Allen.

'Tis the time for evaluating schedules, and ESPN's Kevin Seifert did just that after the Vikings 2022 slate was unveiled.

His bold prediction? That Minnesota will make the playoffs in Head Coach Kevin O'Connell's first season at the helm. Seifert wrote:

They won't beat out the Packers for the NFC North title, but O'Connell has inherited a talented offense and will bring with him a scheme that helped win Super Bowl LVI when he was the Rams offensive coordinator.

Seifert's biggest takeaway from the schedule mirrored Chadiha's note on the tough matchups in Weeks 1 and 2 but expanded a bit beyond that, as well.

The energy of a new coach can sometimes spark a team to a fast start. We shouldn't rule out that possibility for Kevin O'Connell. But he'll face an uphill battle with a Week 1 game against the defending NFC North-champion Green Bay Packers, followed by a Monday night game at Philadelphia and a trip to London in Week 4. If they start slowly, however, the Vikings will have a pretty nice runway at the end of the season if they need to rack up some wins en route to the playoffs. Only one of their final six games will come against a 2021 playoff team: Week 17 against the Packers. Obviously teams can rise and fall abruptly from one season to the next, but the Vikings should benefit from a late stretch with home games against the Jets, Colts and Giants, along with road games against the Lions and Bears.

Seifert also spotlighted the Thanksgiving matchup with New England, which he calls a "revenge game" for O'Connell and the team.

The Vikings have lost five consecutive games in this series, and it has been 25 years since they've defeated the Patriots in Minnesota. O'Connell will have this game circled on his calendar. The Patriots drafted O'Connell in 2008, but he lasted only one season as a backup quarterback before getting waived - and he has already starred in one manufactured revenge scenario. The Jets signed him during the 2009 season, presumably for emergency insurance, but they reportedly wanted to download whatever information he could provide on the Patriots playbook. In turn, they made O'Connell a captain for both games against the Patriots.

Vikings single game tickets for the 2022 season are now available! Click below to view tickets and the full schedule.

When all is said and done, how many games will the Vikings win?

The over/under is 9. Take the over. The Vikings roster has a higher floor than most teams that hire a new coach. It's talented and has averaged nine wins per year over the past nine seasons. With a fresh coat of paint on the offense and defense, and a weakened NFC overall, this team should win at least 10 games.

Download desktop and mobile wallpapers directly to your device.