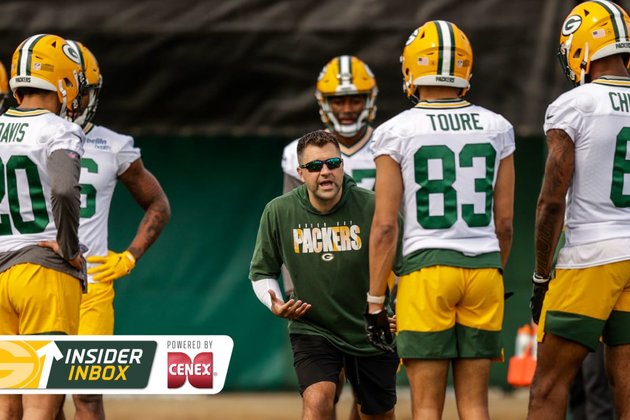 Inbox: Their work is certain to have a sizable impact

That all changes in training campMike Spofford

I just saw some news on a certain CB. Was wondering if Spoff took the rest of the week off?

Ha, nope, but I'm writing a few columns in a row because I am taking time off at the end of this week and through next, so you get a little more of me before a big dose of Wes.

The Packers' schedule doesn't look so bad when looking at difficulty based on last year's records, especially compared to last year. What say you?

Speaking of schedules, how lucky are the Steelers? They do not have to leave the Eastern time zone the entire season. That is wild, and so very advantageous.

Insiders, now that schedule is out what do you see as the toughest stretch? There sure are some strange quirks. I agree the Christmas game has me scratching my head. What are your thoughts?

Three straight road games is a tough stretch no matter what, especially when one of the first two is a night game, because the turnaround time to next week's flight is that much shorter. The only saving grace is none of the three is a long trip.

What is there to write about this time of year? Draft and rookie minicamp are over. Seems like a "dead" time of year.

It's slow but not as dead as the period from mid-June until the start of training camp. The media will be hearing from assistant coaches over the next few days, and then OTAs start next week.

Hey guys, just saw the news about Jaire Alexander's extension! Well-deserved for him and it also clears up some cap space for this year. Any chance there's something left on the pass-rusher tree out back that we could scoop up now? Or will we have to wait until June/training camp? Imagine another De'Vondre Campbell-level impact!

Hitting on an acquisition like that two years in a row is a lot to ask. But the Packers do now have some more cap space to make a move if they feel the right fit is available.

Considering the Packers have played one clunker of a game in each of the past three years (SF in 2019, TB in 2020, and NO in 2021), which game this year is going to be the clunker?

Gambling is illegal at Bushwood, but if I knew the answer, I could make a lot of money.

Good morning, after the tragic events in Buffalo this weekend, it is great to see a former Packer doing what he can to support the victims' families. Micah Hyde is a class act and it would be amazing to see Packerland help support his foundation "IMagINe For Youth." I can't imagine what their community is going through but I'm glad to see people stepping up to help.

Micah is one of the best. Humans aren't made much better than Micah Hyde.

What's the NFL's rationale for not including two-point conversion stats for a player's and team's season?

The points are recorded for the player who scores, but any passing or rushing attempts, yards, receptions, sacks, interceptions, fumbles, etc., don't count because it's an untimed down that exists only for the purpose of adding (or not) two points. How it's achieved (or not) is irrelevant statistically because the yards have no bearing on a first down, field position, or any other aspect. At least that's what I assume is the rationale.

Now that Jaire has inked his extension, whom do you think the Packers should next try to sign long term? I think Elgton Jenkins would be next in line.

That's my best guess, as long as everything goes well with his recovery and he returns to the field without further issues.

Will from Milwaukee, WI

The Packers don't seem to flinch when it comes to offering their players the highest dollar contracts at their respective positions. Congratulations to Jaire. I am ecstatic to know he's going to be shutting down big-time WRs for years to come. On the flip side, seeing what happened with No. 69 and his mega contract followed by a year lost to injury, there is risk to guaranteeing big money. How do the Packers balance the risk/reward for top contracts and guaranteed money?

When you have top players at their positions, you pay what it takes to keep them. Injuries are part of the game, unfortunately. Players who have ongoing health issues, or a reputation for not taking care of their bodies, etc., are viewed differently than those whose injuries fall under the (stuff) happens clause. It's a brutal game. If teams hesitate to make good investments due to a fear of bad luck, all their top players would end up elsewhere.

What does it say about the WR room if Rico Gafford's best chance of making the team is moving to a room that has Alexander, Eric Stokes and Rasul Douglas?

I don't think it says anything except where the numbers are. Gafford was one of 11 receivers on the roster. He's now one of nine corners, and it's a position he played in college.

Good morning, the NFL schedule release incites a focus on won-lost record, but the piece by Spoff on the Day 3 receivers brought me the bliss of enjoying the journey. Ninety characters' stories are unfolding, conclusions unknown. This is a great part of the season. Rooting for Samori Toure to follow the trail blazed by another seventh-round small-school player, out of Alcorn State.

All young players, receivers and otherwise, have to maximize this next month while they're in the playbook-learning phase and conducting non-padded workouts. Mental mistakes are practically expected, and forgiven, while the volume of what they must process continues to increase. There's a slower pace to things, greater repetition involved. That all changes in training camp.

Which non-coordinator assistant coach do you think will have the greatest challenge to get "his" players ready for the season?

Jason Vrable and Luke Butkus have three rookie draft picks in the receiver and offensive line rooms, respectively, which each lost multiple veteran players from last year's team. Whether their new additions become starters or reserves, their work as coaches is certain to have a sizable impact on the season.

With Allen Lazard tendered but remaining unsigned, could the team and player be working on a multi-year extension - could be a bargain to sign him up now rather than later.

I wouldn't totally rule it out, and it could be a bargain for the team. But it takes two to tango, as Ted used to say. With the current market for receiver contracts and Lazard having a great chance to improve on his career-best numbers from last year (40-513-8), it would seem to be in the player's best interest to wait.

Miami on Christmas Day? Vacation time. I'll wager there will be a LOT of green and gold in the stands for that game...

Particularly if the Dolphins are not in the playoff hunt. If they are, it could end up being one of those big games that sneaks up on everybody.

I was curious what you think the reason is for two of the Packers' coordinators (special teams and defense) to take what amounts to a lateral career move?

Barry hadn't been a defensive coordinator since 2016 when he came here last year, so I don't quite follow you there. Bisaccia served a successful stint as the Raiders' interim head coach, was passed over for the full-time post, and reportedly also interviewed for the head job in Jacksonville that went to Doug Pederson. Getting the big gig isn't easy. Staying in the game and doing what he does best is a wiser career move than sitting around and waiting on the next round of head coach openings after only a half-season as an interim. He has a tough task in front of him on a contending team. Success will only continue to raise his profile.

With the Vikings taking a safety and CB as their first two draft picks, I'm curious which position you think - WR or DB - has the shorter time to be productive in the NFL and why.

That's a really hard question to answer. I think it depends more on the individual player and the system he's trying to learn than the position itself.

Hello gents, has there been a schedule of the OTAs and training camp published that I missed? Thanks.

OTAs are slated for the weeks of May 23-26, May 31-June 3 and June 13-16, with the team's mandatory minicamp June 7-9. No word has been given on any workouts being open to the public or media, though. The training camp schedule has not been announced yet.

Any update on the shareholder meeting?

Also not announced yet, but history says it'll be sometime during the week of July 25-29.

With the Packers set to go with Alexander, Douglas and Stokes for, hopefully, the next few years, can we call the secondary the Tertiary?