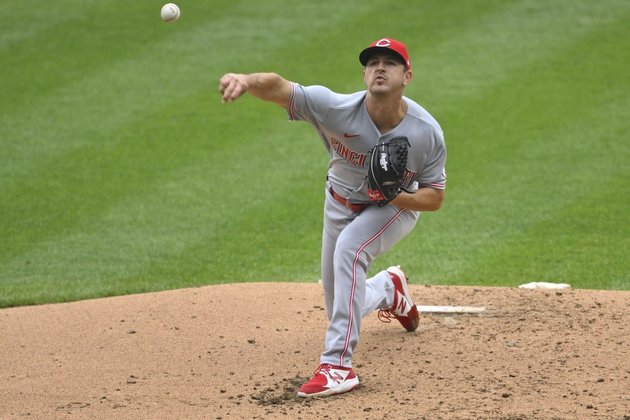 The Cincinnati Reds and visiting Chicago Cubs continue to manage their rosters through injury issues as the teams meet Tuesday in the second game of a four-game series.

Cincinnati shortstop Kyle Farmer had an MRI and cortisone injection Monday on his sore back, leading to Matt Reynolds making thestart.

While the Reds are expected to miss their shortstop for at least the first two games of the series, they received good news with the return of center fielder Nick Senzel and infielder Brandon Drury on Monday.

Senzel made a pair of athletic catches in center in the second inning of the Reds' 7-4 loss to the Cubs.

Drury was back after missing the three-game weekend series in Toronto due to Canada's regulations preventing the entry of unvaccinated visitors.

As for the Cubs, manager David Ross said Monday that catcher Willson Contreras remains day-to-day after leaving the Saturday game with a right hamstring strain. Second baseman Nick Madrigal is making progress from his bout with lower back strain that landed him on the injured list on May 10.

"He's gotten better daily," Ross said of Madrigal. "We'll continue to monitor him and see when that rehab assignment might be coming up."

The Cubs will send right-hander Marcus Stroman (1-4, 4.88 ERA) to the mound on Tuesday. Stroman was activated from the COVID injured list on Thursday and started against the Arizona Diamondbacks. He took the loss after allowing three runs (two earned) in five innings during his first appearance since May 1.

Stroman will be making his fifth career start against the Reds, against whom he is 2-1 with a 2.96 ERA. In his last appearance at Cincinnati, he tossed eight scoreless innings and allowed only one hit and a walk while striking out seven batters in a 7-0 win for the New York Mets on July 21, 2021.

The Reds counter with right-hander Tyler Mahle (2-4, 5.23 ERA). In Cincinnati's 4-2 win at Cleveland on Thursday, Mahle tossed 6 1/3 innings of one-run ball in a no-decision.

Mahle's past two appearances produced his first two quality starts of the season. In those outings, he went 1-0 with a 2.19 ERA, allowing three runs over 12 1/3 innings, striking out 12 and walking three. The Reds have won his last three starts.

The Reds will be without one of their most effective pitchers for at least two months after Connor Overton landed on the 60-day injured list on Monday. The right-hander has a bone bruise that caused a stress reaction in his lower back, spotted in an MRI.

"I'm super bummed out," Overton said. "It is extremely frustrating because I was in a good spot mentally and physically, or at least I thought."

Since joining the rotation on April 30, Overton went 1-0 with a 1.82 ERA in four starts, quickly becoming Cincinnati's most dependable starter.