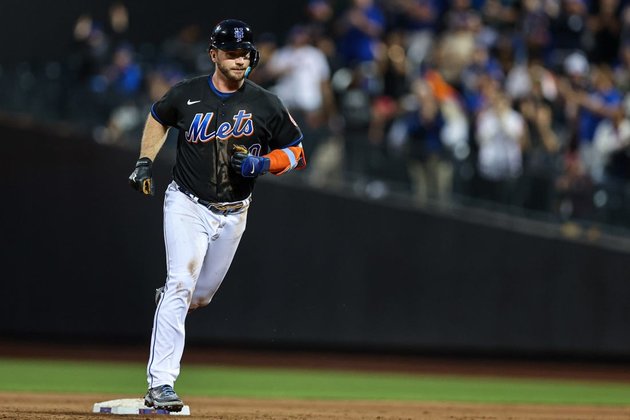 The Philadelphia Phillies followed suit, thanks to their struggling defense.

The Mets look to clinch another series win on Saturday when they host the Phillies in the middle contest ofa three-game series.

Alonso lofted a sacrifice fly in the first inning, hit a two-run homer in the third and had an RBI double in the fourth for the first-place Mets, who snapped a two-game losing streak. His 45 RBIs are the most in the majors, as well as the most by a New York player before Memorial Day.

Alonso is on pace for 156 RBIs, which would shatter the single-season franchise record of 124, set by Mike Piazza in 1999.

Alonso's sacrifice fly scored the first run in a three-run inning by the Mets, who wasted no time taking advantage of the Phillies' defensive struggles. Brandon Nimmo hit Bailey Falter's first pitch of the game to shortstop Bryson Stott, who overthrew first base and was charged with an error.

The Phillies finished with two errors, increasing their season-long total to 27 -- the 10th-most in the majors. But defensive runs saved, a metric established by Baseball Info Solutions, paints a much more discouraging picture for Philadelphia, which entered Friday with negative-25 runs saved, second-worst behind only the San Francisco Giants.

"You look at that first inning, he probably doesn't give up a run," Phillies manager Joe Girardi said. "It led to extra pitchers. Who knows?

"Our defense hurt us."

A four-game series split earlier this week against the Atlanta Braves featured a pair of instantly viral gaffes by the Phillies. On Tuesday, Roman Quinn dropped a game-tying sacrifice fly in the ninth inning of a 5-4 walk-off loss. On Wednesday, catcher J.T. Realmuto's throw sailed into center field and under the glove of outfielder Odubel Herrera as Dansby Swanson scored the tie-breaking run in the Braves' 8-4 victory.

Walker earned the win last Sunday, when he allowed five hits over seven scoreless innings in a 2-0 victory over the Colorado Rockies.

Walker is 1-2 with a 3.74 ERA in nine career starts against Philadelphia.

Eflin didn't factor into the decision Sunday after surrendering two runs to go along with a career-high 12 strikeouts over seven innings in the Phillies' 4-3 win in 10 innings over the Los Angeles Dodgers.