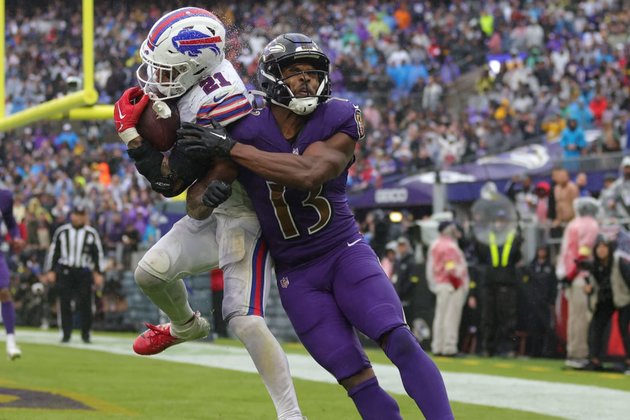 The Ravens went for it Sunday, but the Bills didn't budge.

Head Coach John Harbaugh took a calculated risk on Baltimore's final possession, and it didn't work out. With the score tied 20-20 with 4:15 left, the Ravens went for it on fourth-and-goal from the two, instead of kicking a go-ahead field goal.

The play was thwarted when Lamar Jackson was flushed out of the pocket and threw a pass that was intercepted in the end zone by Bills safety Jordan Poyer. The turnover made not scoring even more costly for Baltimore, because it gave the Bills possession at the 20-yard line, instead of starting the drive backed up at the two-yard line.

After the game, Head Coach John Harbaugh explained why he went for the touchdown instead of the field goal.

"I felt like it gave us the best chance to win the game," Harbaugh said. "(If we score) seven, the worst that happens is if they go down the field and score - and I think we'll get them stopped - the worst thing that can happen is you're in overtime. But you kick a field goal there, now it's not a three-down game anymore, it's a four-down game. You're putting your defense at a disadvantage because they've got four downs to convert all the way down the field and a chance to again score seven, and then you lose the game on a touchdown.

"I'm very confident in the defense's ability to stop them down there with the ball on the two-yard line, so we have them backed up if we didn't get it. It didn't turn out that way, unfortunately, and we lost the game. So, hindsight, you could take the points, but if you look at it analytically, understand why we did it."

Jackson understood Harbaugh's decision, but the Ravens didn't execute the play. Buffalo's pass rush prevented Jackson from seeing Devin Duvernay when he was wide open in the corner of the end zone. By the time Jackson spotted Duvernay, it gave Poyer time to pursue and make the interception.

"(I saw a) tall defensive lineman with his hands up," Jackson said. "I was trying to see around him to see where my guys were, but I saw Duvernay late. If I would have seen him right off the bat, that would have been a touchdown."

The turnover wasted a methodical march by the Ravens, who drove 94 yards from their five-yard line to a second-and-goal from the one. However, J.K. Dobbins was stuffed for a three-yard loss to make it third-and goal, and Jackson was stopped for a two-yard gain after scrambling on third down.

Right guard Kevin Zeitler wasn't surprised with the decision to go for it, but was surprised the Ravens didn't make it work.

"This team, we're always ready, whenever it is, to take big chances [and] go for it on fourth down or go for touchdowns and put us in a better position to win," Zeitler said. "We have faith we can get it done. Obviously, it just didn't happen that way this time."

All-Pro tight end Mark Andrews said he looked forward to future opportunities to convert on fourth down. He appreciates Harbaugh having confidence that the Ravens will convert, and the offense will focus on improving its execution in those situations.

"All 11 guys just need to be a little bit better, a little sharper," Andrews said. "I have a lot of confidence in this offense, this team, the guys that we have to make that play. I love that coach trusts us. Hopefully we get another opportunity like that, we'll be ready to go. I'm a dog. I like to attack."