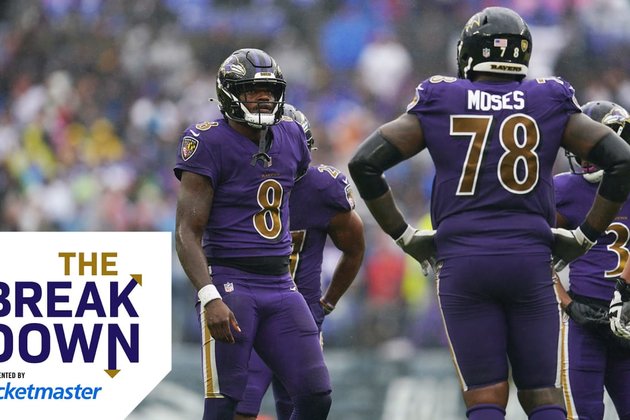 The Breakdown: Five Thoughts on Ravens' Loss to Bills

Five thoughts on the Ravens' 23-20 loss to the Buffalo Bills in Week 4:

Another Blown Lead at Home Stings

It was a too-familiar feeling as the Ravens and fans exited M&T Bank Stadium with a pit in their stomach following another blown lead Sunday.

It stings to lose after building a 17-point first half lead against one of the best teams in football. A statement win slipped through the Ravens' fingers in rainy Baltimore.

Then add to it the frustration of it happening a second time this season, after Baltimore lost a 21-point lead to the Miami Dolphins in the fourth quarter two weeks ago, also at M&T Bank Stadium. Then, pile on some more hurt with a fourth-down call that didn't pan out, bringing back painful memories of last year's game-winning attempts on two-point conversions. And sprinkle in some anger over the officiating, too.

Against the Dolphins, a couple long touchdowns in the fourth quarter stunned Baltimore. This time, it was a slower drip, as the Bills started to rally just before halftime after the defense was dominating early, the offense was shut out in the second half, and the defense couldn't stop a long march at the end (then stopped it when it didn't want to) that ended with the Bills' game-winning 21-yard field goal.

The Ravens' frustration from another comeback loss was on display. The Ravens could easily be 4-0, but they're not. Still, it's Week 4 and the Ravens sit tied atop the AFC North. Now Baltimore needs to spend this week positively channeling their frustration into getting ready for an even bigger home game against the Cincinnati Bengals, because if this happens again, it's going to be tougher to bounce back from.

Another Gamble Doesn't Pay Off

Head Coach John Harbaugh's decision to go for the touchdown on fourth down from the 2-yard line will, of course, be second-guessed. There are two ways of looking at it and both are legitimate when removing the benefit of hindsight.

If looking for reasons to go for it, the Ravens had marched all the way from the 5-yard line. You have Lamar Jackson, who has been lights out in the red zone this season. Even if you're stopped, the Bills are backed up against their own goal line. A field goal leaves the door open for the Bills' potent offense, which still had plenty of time, more than four minutes, in fact, to tie or win the game. How many times have we seen Josh Allen win in those situations?

If looking for reasons not to go for it, the Ravens have struggled to run on the goal line this season and got blown up for a 3-yard loss on second-and-goal from the 1. The Bills pass rush had Jackson scrambling. Baltimore's defense was coming off a three-and-out on the previous drive, had held Allen under 200 passing yards to that point, and had picked him off. They closed the Patriots out with interceptions last week, so maybe they could get another one.

In the end, Jackson said the Ravens should have scored a touchdown had they executed. The play call worked, as Devin Duvernay popped wide open out of a bunch formation in the corner of the end zone. But under pressure from the edges, Jackson didn't see Duvernay until it was too late, and his fadeaway pass was intercepted.

"I was fine with it," Jackson said of the fourth-down decision. "If we had executed on third down, there wouldn't have even been that question. Nobody would be disappointed." He's right.

Baltimore's Secondary Improved. Linebackers Must Be Next.

If you said before the game that the Ravens' No. 32-rank defense would hold Allen to 213 yards, one touchdown (passing) and one interception, you would probably chalk up a Baltimore win. The NFL's leading receiver going into the game, Stefon Diggs, had just 62 yards.

Baltimore's secondary is too talented to keep giving up as many yards as it had through the first three weeks, and that showed against the Bills. The rain and drops were certainly a factor, but credit the Ravens secondary for keeping a lid on Buffalo's big-play passing game.

However, Allen ended up beating Baltimore's defense too often with his legs, a feeling Ravens opponents have felt countless times facing Jackson. Allen scrambled 11 times for 70 yards and a touchdown late in the third quarter. The Ravens missed too many tackles, including one fourth-down scramble when Odafe Oweh had Allen in his crosshairs. That conversion turned into a Bills field goal. Patrick Queen dropped an interception for a second straight week, and the Bills capitalized with a touchdown.

Oweh had the team's only sack Sunday. Jason Pierre-Paul can help the pass rush, but Baltimore needs Tyus Bowser back on the field yesterday, and hopefully rookie David Ojabo isn't too far off either. Oweh had his best game yet with a team-high seven tackles and forced fumble, but Baltimore needs more across the board.

The Ravens rushing attack has a different bite with J.K. Dobbins. In his second game back from last year's knee injury, Dobbins scored two touchdowns in the first quarter and had the majority of the carries out of the backfield.

It's a feel-good story for Dobbins, who was chomping at the bit to play in a packed M&T Bank Stadium for the first time. He'll get even better in dry conditions as he continues to ramp up.

But even with Dobbins' hot start, Justice Hill continued to show his value (and speed). A couple of runs of 10 and 12 yards, respectively, got the Ravens out of a hole to jumpstart a crucial fourth-quarter drive. But just when Hill got going, he tweaked his hamstring on a 14-yard run and didn't return. Given the way Hill's been running, an extended absence would hurt.

It's easy to criticize the refs and it sounds like whining when you lose. But this one deserves some ink. Jerome Boger missed the call on the critical roughing-the-passer penalty that put the Bills in field-goal range on their game-winning drive. After the game, Boger said he saw "forcible contact to the head/neck area" by cornerback Brandon Stephens, which just didn't happen. It was a tough day overall, as Mark Andrews was also called for a ticky-tack offensive pass interference in the first half that turned what would have been first-and-goal from the 1 into a field goal. Potential four-point swing right there. The Ravens entered the game as one of the NFL's least penalized teams yet were flagged nine times for 70 yards, and they weren't all earned. The Bills drew four penalties.

The Ravens were trying to let the Bills score a touchdown on their final drive and it seemed like it might happen but Oweh tackled Devin Singletary at the 3-yard line while his teammates let up. Oweh said he understood the directions to be "strip the ball out or let him score" and he went for the strip. A comeback is certainly no guarantee needing a touchdown with less than two minutes left and one timeout, but it would have been good to get the chance.

Odd to see Rashod Bateman not on the field down the stretch despite having his helmet on. Bateman was banged up earlier in the game, thought Harbaugh didn't indicate that he was out because of injury. Bateman had a spectacular diving catch early in the game to convert on third down, but also some ones he'd like to have back. One slant was not an easy catch in the rain, but the too-frequent drops are something he's going to have to iron out.