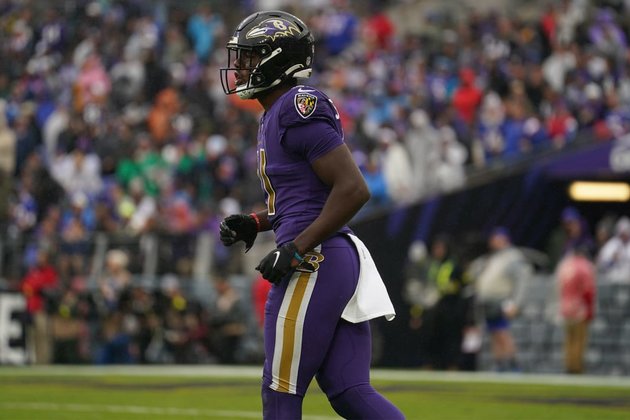 A controversial call that went against the Ravens made Sunday's 23-20 loss to Buffalo more difficult to stomach.

Brandon Stephens was called for roughing the passer on Buffalo's game-winning drive, although replays showed that Stephens did not make indisputable direct contact with quarterback Josh Allen's head/neck area. Allen's head snapped back, but Stephens grabbed the quarterback with both arms near Allen's waist and pulled him to the ground.

After the play, Allen slammed his hands on the ground in anger and asked the officials to throw a flag, and the star quarterback got his wish.

On the CBS broadcast, analyst Charles Davis said he did not think a penalty should have been called on Stephens.

"I think he was right there to make the play on Josh Allen," Davis said. "I don't like the call."

It was a crucial flag with the score tied 20-20 and 2:06 left to play. Allen threw an incomplete pass on the play on which Stephens was penalized. Without the flag, Buffalo would have faced 2nd-and-15 from the Ravens' 41-yard line. Had the Bills failed to get another first down, Baltimore would've had time for one more possession, even if Buffalo had kicked a go-ahead field goal.

Instead, the 15-yard penalty gave Buffalo a first down at the Ravens' 26-yard line. From there, the Bills moved the ball to the 2-yard line, setting up Tyler Bass' game-winning field goal as time expired.

Referee Jerome Boger was interviewed by pool reporter Jeff Zrebiec of The Athletic after the game, and Boger was adamant that Stephens had made head-neck contact.

"What I had was forcible contact in the head/neck area of the quarterback with the helmet," Boger said. "When I spoke to the official, that wasn't to confirm what I saw. I was trying to get the right number. I announced it as 23, but it ultimately was 21. I wasn't sure of the number."

Earlier in the game, inside linebacker Patrick Queen said Allen was begging for a flag when he was hit by Queen.

"I could kind of tell it was about to go that way," Queen said. "The very first time I hit him, he looks at a ref and calls his name out. Eventually, they're going to give him one."

It was one more frustrating moment in a loss that dropped Baltimore to 2-2. Right guard Kevin Zeitler said it was imperative that the Ravens not dwell on the defeat.

"It hurts, it burns, everyone is angry; that's good," Zeitler said. "We need to use that and get that to improve. We have another tough test next week, and we've got to get it going."