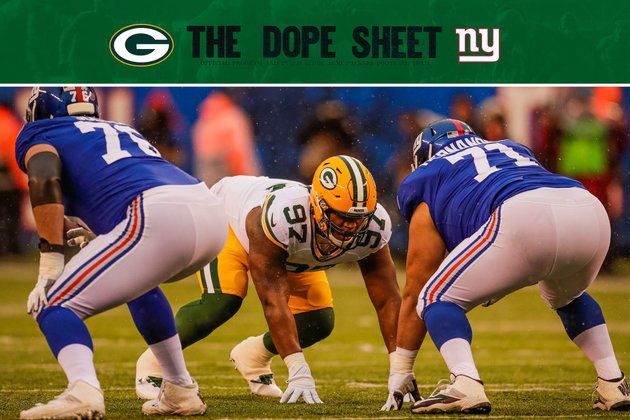 The Green Bay Packers (3-1) travel across the Atlantic Ocean to take on the New York Giants (3-1) this Sunday.

The Packers will become the 32nd NFL team to play in London since 2007. It is the first London matchup between two teams with winning records.The game will be played at Tottenham Hotspur Stadium in London with a local kickoff of 2:30 p.m. It is the largest football club stadium in London, with a capacity of 62,850.While it is the first regular-season game outside of the country for the Packers, it will be the sixth game overall that Green Bay has played outside the United States. Previously, The Packers played internationally during the preseason on three occasions: in Toronto in 1997, Tokyo in 1998 and Winnipeg in 2019; and on Christmas Day in 1932 and on New Year's Day in 1933 the Packers played two games as part of a team-sanctioned barnstorming trip to Hawa'ii to play two local teams, which at the time was a territory of the United States.The Packers (785) and Giants (709) are two of the three winningest teams (Chicago, 785) in NFL history in terms of regular season victories.Including the postseason, the Packers have won each of the last three matchups against the Giants, scoring over 30 points in both of the last two games (31, 38).Five of the last six games between the two teams (including playoffs) have been decided by 14-plus points, with each team winning three times.The Packers return to the states to host the New York Jets in Week 6, marking the second time Green Bay has played the New York teams in back-to-back weeks (Weeks 2-3 in 1985).

The game will be broadcast by the NFL Network and will also be simulcast on WLUK-TV in the Green Bay market and by WTMJ-TV in the Milwaukee market. Play-by-play man Kevin Kugler joins analyst Mark Sanchez with Stacey Dales and Laura Okmin reporting from the sidelines.

Westwood One Sports will be broadcasting on radio to a national audience with Bill Rosinski (play-by-play) and Derek Rackley (analyst) on the call and Scott Graham hosting pregame and halftime shows.All Packers games can be heard on the Packers Radio Network, which is made up of 49 stations in Wisconsin, Michigan, Minnesota, Illinois and South Dakota. This year, the Packers transitioned to a new flagship station in Milwaukee, iHeartRadio Milwaukee's 97.3 The Game WRNW. For a full listing of radio affiliates, go to packers.com/video/radio-network. Wayne Larrivee (play-by-play) and two-time Packers Pro Bowler Larry McCarren (analyst) call the action. McCarren first joined the team's broadcasts in 1995 and enters his 28th season calling Packers games. After originally being paired together in 1999, McCarren and Larrivee enter their 24th season of broadcasts together. They surpassed Jim Irwin and Max McGee for the most regular-season and postseason games broadcast for the Packers with 313 at the 2018 season opener against Chicago.The Packers' radio broadcast is also available on a mobile device through the Packers app or packers.com for anyone that lives in the state of Wisconsin. If you live outside the state, you can stream the game broadcast from a desktop computer through packers.com. It is also available via subscription on Sirius Satellite Radio or NFL Plus (nfl.com/plus).

This is an abbreviated version of the Dope Sheet. Read the full version here (PDF).

THE DOPE ON THIS WEEK'S OPPONENT

In his 14th season in the NFL, having previously served as an offensive coordinator for two seasons (L.A. Rams, 2017; Tennessee, 2018), a quarterbacks coach for six seasons (Washington, 2010-13; Atlanta, 2015-16), and an offensive assistant for two seasons (Houston, 2008-09).In his first three seasons leading the Packers, he has authored one of the greatest starts to a head-coaching career in NFL history. With a 13-4 record in 2021, he led the Packers to a third straight NFC North crown while also earning the No. 1 seed in the NFC for the second consecutive season.Became the first coach in NFL history to post 13-plus wins in three straight seasons and his 39 wins from 2019-21 passed George Seifert (38) for the most wins by an NFL head coach in his first three seasons in the league (Elias Sports Bureau). His 39 wins are also tied for the second most by a coach over any three-season span in league history, trailing only Mike Ditka's 40 wins with the Chicago Bears 1985-87 (Elias).Has guided the Packers to a 22-2 record (.917) in the regular season at Lambeau Field, the top home mark in the NFL from 2019-21 and the best home winning percentage by a Packers head coach in his first three seasons. His 22 wins at home were also the most in NFL history by a coach in his first three seasons.In his first season leading the Packers in 2019, became the first coach in club history to lead the team to the playoffs in his debut season. Also led the largest one-year win improvement in team history (plus-seven wins).

Joined the Giants after serving the past four seasons (2018-21) as the Buffalo Bills' offensive coordinator.Has 20 years of NFL coaching experience, including 11 seasons with the New England Patriots (2000-06, 2013-16) in a variety of roles as he helped the Patriots win five Super Bowls.Served as the quarterbacks coach for the N.Y. Jets in 2007-08 and was an offensive coordinator for the Cleveland Browns (2009-10), Miami Dolphins (2011) and Kansas City Chiefs (2012).In 2020, was voted the NFL Assistant Coach of the Year by The Associated Press after the Bills finished 13-3 and ended the Patriots' streak of 11 consecutive division titles. QB Josh Allen finished second in the NFL Most Valuable Player voting after setting Buffalo single-season franchise records with 4,544 yards, 37 TD passes, a 69.2 completion percentage and a 107.2 passer rating.Helped the University of Alabama to its 17th national championship as he served as the offensive coordinator and quarterback coach in 2017.

This is an abbreviated version of the Dope Sheet. Read the full version here (PDF).

Green Bay followed up by winning six of the next seven contests.Green Bay's five-game winning streak from 1961-69 included two NFL title games and is the longest streak of the series.New York and Green Bay have met in the NFL Championship five times (1938, '39, '44, '61 and '62) with Green Bay winning each except 1938.The Packers and Giants have met three times in the postseason during the Super Bowl era. The teams met in the 2007 NFC Championship, the NFC Divisional round in the 2011 postsason and the NFC Wild Card round in the 2016 playoffs.