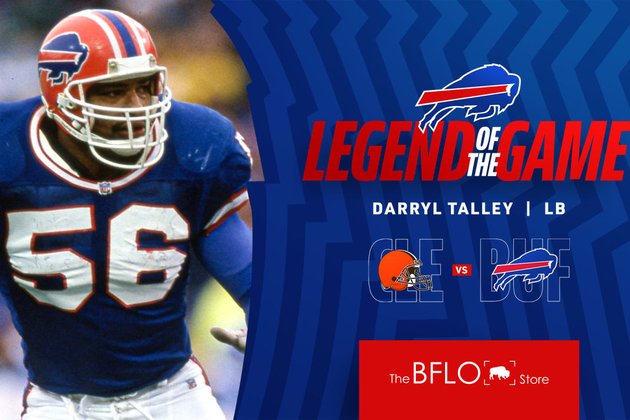 Darryl Talley will get Bills Mafia out of their seats as the Legend of the Game Sunday afternoon when the Bills welcome his hometown team, the Cleveland Browns, to Highmark Stadium.

After playing in Buffalo for 12 seasons, the former LB is more than ready for the potential lake-effect snow that will be passing right through Orchard Park in the days leading up to kick-off. Talley has seen for himself the challenges this weather can present, especially to his quarterbacks. But No. 56 has full confidence in QB Josh Allen to throw the ball through the win, just like he saw his former QB Jim Kelly do when they were in Bills uniforms together.

"That's Buffalo weather, we live for that, and everybody knows that," Talley said. "When it's too tough everywhere else, it's just right for us. That's why Marv (Levy) came up with that saying I think because that was one of our key weapons. People would come to Buffalo, and they'd be scared. They didn't care about us; they were more worried about staying warm than playing the game."

In 188 games with the Bills, the Cleveland native tallied 11 interceptions, two touchdowns, 38.5 sacks, and 83 solo tackles. Talley was also named to the Pro Bowl in 1990 and 91. Talley spent his last two seasons in the NFL with the Atlanta Falcons and Minnesota Vikings.

And his 14-year NFL career encouraged him to stay connected to the game through the NFL Legends Community.

"I think that we can give the younger guys an insight as to what they got to look forward to," Talley said. "Just by talking to them, they get an understanding of how we felt as players, and how together we were as a team. We all show up, and we all want the very best for them because at heart, we're all still Buffalo Bills. We spent so much time there and we love the city of Buffalo."

Now after watching the young guys in the first two 10 weeks of the season, Talley is proud of their ability to not let one game define them.

Now Sunday's game is special for Talley for many reasons - 1. Having the honor of being the Legend of the Game, 2. Seeing the 2022 Bills up-close in person against a team his brother John Talley played for, and 3. Being in the crowd as the team celebrates Native Heritage Month.

"To be able to hear about your heritage being given some time in a professional sports setting that really didn't have to, but they do out of the kindness of their hearts means the world to me," Talley said. "I'm really proud of the fact that they're doing that. It makes me proud to be a former NFL player."