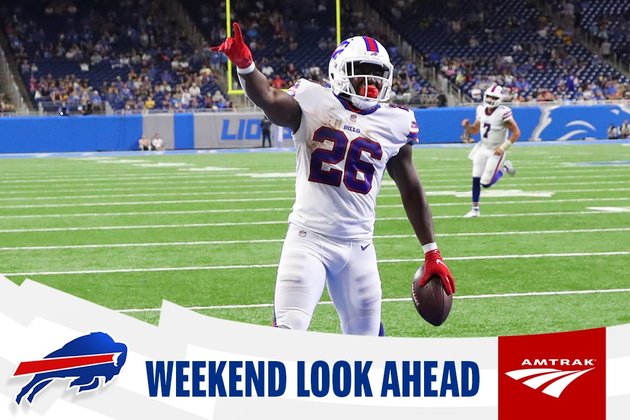 The lake effect snowstorm forecast for Buffalo and its surrounding suburbs late this week prompted proactive action by local and state authorities to move the Bills game Sunday at 1 pm against Cleveland to Detroit's Ford Field.

Up to three feet of snow is being forecast for the suburbs south of Buffalo, which includes Orchard Park where Highmark Stadium is located from Friday into Saturday.

Bills GM Brandon Beane did acknowledge they'd prefer to have their game at home, but they were prepared to be flexible.

"Yes, you'd always rather play at home and to your routine," Beane said. "That's always the first preference. But with the local officials and the safety to our community wins out on a football game. But Sean does a great job of messaging and making sure our guys understand. There's still going to be a football game. Everything else is the same.

"It's a short flight. We're going to try to keep it as routine as possible. Is it a little disruption? Yes, but I think our guys are pros. They understand it. I know the one year we had to go to Arizona twice during the COVID year. So we'll have to go to Detroit twice in the same week."

After playing Cleveland at Ford Field on Sunday, the Bills will return to Buffalo, only to return to the Motor City on Wednesday for their Thanksgiving Day game against the Lions at 12:30 pm.

Head coach Sean McDermott emphasized the need to be ready to pivot if the weather impacted the game on Sunday. Now his team will play a neutral site game this weekend.

Buffalo has been through this kind of weather-related decision before. Seven years ago almost to the day, the Bills home game against the New York Jets on November 23rd was moved to Detroit and played a day later on Monday night November 24th after six feet of snow fell in Buffalo over the course of three days, later dubbed 'Snow-vember.'

The Bills won that game handily over the Jets by a score of 38-3.

The credentials of Browns RB Nick Chubb need no introduction. Currently third in the league in rushing behind only Tennessee's Derrick Henry and the Giants' Saquon Barkley, Chubb has five 100-yard rushing days this season and has had most of his success outside the tackles.

In their first six games, the Bills were one of the best defenses in football in defending outside runs ranking tops in the league in yards per carry allowed on such runs (3.4) and yards after contact per carry outside (2.5). But since Week 8 the Bills have ranked in the bottom five in the league in both categories.

"We've just got to do a good job of not giving up the explosive (plays)," said defensive coordinator Leslie Frazier. "That explosive run that Dalvin (Cook) had (last week) really put a damper on some of the good things we were doing against the run (last Sunday). And Chubb is another type of back who you can stop, and stop, and stop, and all of the sudden he can break one. So we have to learn from (last Sunday's) ball game and just stay gap sound and tackle throughout because he is an exceptional running back and one of the best if not the best in the National Football League."

After watching the Bills defensive front on film, Chubb has respect for their ability to neutralize their opponents' ground attack.

"They play hard. Big guys up front who want to stop the run for sure," said Chubb. "They do a great job. Very tough, big motors. Their safeties come downhill fast and make plays. It's a very good defense."

But since Week 8, Buffalo has allowed three running backs with 12 or more carries average six yards per carry or more.

The Browns have averaged 158.8 rush yards per game this season, good for fifth in the league, and their 16 rushing touchdowns are second most in the NFL. Chubb has 11 of those 16 rushing scores.

Josh Allen has had a bit of a rough patch with turnovers of late, but the Bills quarterback has drilled down on what has led to the majority of those giveaways.

"Decision making, I think is number one," said Allen. "Trusting the game plan, trusting the guys around me and not trying to do too much, and getting back to playing smarter football. Early on in the year, we were playing really smart football. And it's not this huge makeover that's going to change the team. It's something very simple that I can do to help this team out. And that's something I plan on doing."

Seven of Allen's 10 interceptions have come against zone coverage this season according to Next Gen Stats, which is tied for the most in the NFL. Cleveland has largely been a zone defense this season calling zone coverage on just over 75 percent of their snaps, good for ninth highest in the league. Making the necessary corrections to his personal game will be critical in reducing the negative plays when facing zone coverage.

Allen admitted to stepping over the line on occasion in terms of the decisions he made with the football instead of playing within the scheme and letting the game come to him. But the Browns have been susceptible to the deep ball this season allowing an opponent passer rating of 129.5 on deep passes, the third highest figure in the NFL. They're also giving up over 11 yards per completion (11.1), which ranks fifth highest in the league. Those numbers and Allen's big arm have the Browns concerned about defending the entire field.

"He's a great, great player," said Browns head coach Kevin Stefanksi. "He's a huge percentage of their offense, whether it's the pass game, designed QB runs or the off-schedule plays, which he's unbelievable at. He has good players on the outside, he has a good line that protects him, but when he wants to buy time and he's a huge threat to run who is hard to get on the ground. He's a huge threat to buy time and survey the field seemingly forever. Josh has really impressive weapons on the perimeter, which makes plays go on for a while. It's hard to mimic in practice, but until he's down on the ground, there's an incomplete pass or you hear the whistle the play is never over with him."

The Bills have found it challenging to put the ball in the end zone in the second half of games of late. Buffalo doesn't have a second-half touchdown since their Week 6 game at Kansas City. While they've been extraordinarily productive in the first half of games with eight touchdowns and two field goals on 16 first half drives the last three games, they've got just four made field goals on 15 second-half drives over that same stretch.

Offensive coordinator Ken Dorsey has thoroughly reviewed all the film from those games and believes they're not far off from breaking through with scoring plays in the second half.

"We're going to look at it as coaches to make sure we're putting our players in the best position to have success in those situations," said Dorsey. "And we're going to look at it on tape to make sure that we're executing and we're doing the things that we need to on the field. At times there are a lot of good things. There was a lot of good things in that second half in that last game. We just didn't capitalize. And we've got to make sure we're doing that. We'll continue to focus on that and harp on it and just continue to just lock down the details of what we're doing."

Part of the problem has been turnovers in the red zone, an area where Buffalo has left points on the board each of the last five games with giveaways.

"We're going to stress the heck out of it moving forward, like we have been," said Dorsey of smart decision making in the red zone. "We've got a ton of faith in Josh. We believe in Josh. He's our guy. And he's done so many good things.

"It's a double-edged sword because a lot of those plays that he's making out there on the field, a lot of guys aren't going to make. And so it's finding that balance, finding that fine line of when to take those chances and when to throw it away and be smart with the ball."

Points in the second half might not be hard to come by knowing the Browns defense gives touchdowns on more than 28 percent of their opponents' possessions. That's the third highest opponent touchdown percentage in the league. And their 92 points allowed in the fourth quarter this season is a league high.

The Bills offense will be facing a premier pass rusher in Myles Garrett on Sunday. The two-time first team All-Pro currently ranks ninth in the league with 7.5 sacks, but he's had even greater success against AFC East opponents.

Garrett has 13 sacks in his nine career games against the AFC East. He did not have a sack in his only previous game against the Bills in 2019, though he did have a pair of quarterback hits.

"He's probably, one of the best defensive ends to ever played this game, and I think the more time (that goes by), I think more people will start to agree with me on that," said Von Miller.

He's also second all-time among first overall picks in the draft with 66 sacks in his first 76 games only to Hall of Famer Bruce Smith (76.5).

With Buffalo currently in third place in the division due to a head-to-head tiebreaker edge for the Jets and a 7-3 record for the Dolphins, Bills fans now have to keep tabs on how the rest of the division is faring each week going forward.

The Bills Mafia will not have to do too much looking around as the Dolphins are on their bye week and the Jets travel to New England to face the Patriots.

New York will be looking for a bit of revenge after three interceptions by Zach Wilson led to a loss to the Patriots in their first meeting at MetLife Stadium.

Pulling for a Patriots victory would provide the most help to the Bills as it would drop the Jets and Patriots into a tie with 6-4 records.