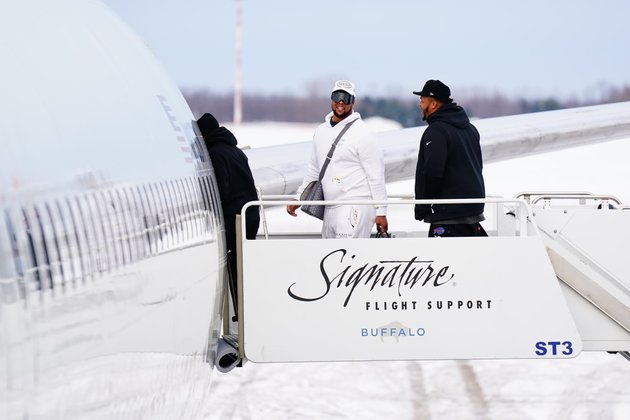 Bills head coach Sean McDermott has a giant canvas sign that hangs on the practice field fence. It was first introduced in 2020, the first COVID-19 season when a myriad of challenges was widely anticipated. That sign still hangs there now and it has just three words.

It would be hard to think that McDermott ever thought a lake effect snowstorm would press his players, coaching staff, and support staff into a situation every bit as challenging as one they would face during the regular season.

But that was the case on when a lake effect snowstorm dropped more than six feet of snow on the suburb of Orchard Park and close to that amount in the surrounding towns between Thursday evening and the early morning hours of Saturday. Getting Buffalo's travel party along with the players and coaches to the Buffalo airport for a flight to their relocated game in Detroit by late Saturday afternoon was going to be a heavy lift.

"We had two plans," said Bills Chief Operating Officer and Executive Vice President, Ron Raccuia. "They were supposed to work in conjunction with each other. We had a series of plow drivers lined up to go to players' houses and plow them out and then the players could drive to the facility, but early Saturday morning we realized that wasn't going to work. There was too much snow for plow trucks to move and there was a driving ban in Orchard Park. So at that point we shifted to a full-scale pickup operation."

The Bills were on a Zoom call at 8 am with the NFL to keep them apprised of their travel plans and the conditions they were dealing with in Orchard Park. Fortunately, the lake effect snow band had drifted north giving Orchard Park and the Southtowns time to recover. After speaking with the league, Raccuia along with the football department met on a Zoom call together and determined that the pickup plan had to begin immediately. After getting an update from Erie County Public Works and the County Executive's office on which streets had been plowed and which streets were impassable, they set out.

"We broke it down into neighborhoods and determined who could get out and how close they lived in proximity to other players and staff," Raccuia said. "Then (Football Administration and Operations Coordinator) Ryan Moore and (Coordinator of Player Services) Kelsey Harkins basically ran point on logistics. So as they were calling players, they were then calling us to update us on the status of players being able to get to the stadium. There were more numerous impassable streets than we had anticipated."

Raccuia rode with Vice President of Communications Derek Boyko. There were other staff members picking up players. GM Brandon Beane and head coach Sean McDermott even picked up players and coaches that lived near their homes.

Many players living in the areas hit hardest by the storm couldn't get much past their front doors let alone find their cars under multiple feet of snow.

"We felt compassion for a lot of our players," said Raccuia. "Their houses were surrounded by snow. They hadn't been plowed out. Their families were nervous. They hadn't experienced this before. We're about to take them out of town and they're leaving their families behind, and they're stranded."

Raccuia and Boyko initially set out to pick up S Cam Lewis and OL Bobby Hart, but they called Harkins to tell them they had gotten out and could make it on their own. Raccuia and Boyko shifted their assignment to picking up Dion Dawkins.

"He was our main focus because he was in Hamburg and he was completely snowed in," said Raccuia.

Hamburg was second only to Orchard Park in total snow accumulation with 73 inches.

"It took us an hour and 25 minutes to get from near the stadium to Dion's house in Hamburg, one way," Raccuia said. "We tried at least three different ways to get there, and we kept getting turned around."

After finally finding a way into Dawkins' development, they found his street plowed, or so they thought. It was only plowed a third of the way down the block.

"Neighbors told us that the plow gave up." Raccuia said. "So I just got out of the car, Derek called Dion to tell him I was walking to him. I went through waist deep snow to Dion's house and led him back out. There were a handful of neighbors outside trying to move the snow around their homes and they were saying, 'Good luck this weekend Dion!' It was really cool."

Much like Dawkins, RB Devin Singletary's street had not yet been plowed and he had to walk about a quarter of a mile in waist deep snow to get to his ride on Southwestern Boulevard in Blasdell.

"I had to walk from my house out to Southwestern so (Assistant Director of Pro Scouting) Chris Marrow could pick me up," said Singletary. "The snow was up to my waist. Walking through that snow was like a beach workout. I got to the end of my driveway and had to take a breath. Some of my neighbors filmed me walking down the street. I saw it later on social media."

Dawson Knox was one of a handful of players who documented their snowbound circumstances on social media as his neighborhood residents came to his aid.

"It's the City of Good Neighbors man. It's hard to believe, but we pulled it off," Knox told Buffalobills.com. "I was carrying my suitcase over my head trudging through the snow. Tommy (Sweeney) was with me. Thanks to an assembly line of neighbors shoveling we were able to get out. They just all showed up and got to work. I have a long driveway, so there was no way we would've gotten out. It was amazing to see."

Other players needed more extreme means to get transported to One Bills Drive like LB Tremaine Edmunds. Bills Director of Security Chris Clark contacted the Erie County Sheriffs Special Operations department, which has snowmobiles for rescues.

"We do multiple things, but one of them is the snowmobile unit with skis and rescue help," said Brian Britzzalaro, Chiefs of Special Operations. "So, snowmobilers went over to Tremaine's house and Sergeant Jordan Grabar picked him up and took him to Highmark Stadium so he could get on the bus and go to the airport."

"Lieutenant Warren Luick, who does most of the escorts for the team every week when they're here, comprised a number of deputies," said Britzzalaro. "They got together and escorted the buses to Highmark early this morning, waited while they loaded up everything and then escorted them from Highmark to the Air Cargo center so they could disembark and go to Detroit."

Raccuia and the Bills organization held a great deal of gratitude and appreciation to the residents who helped clear a path for several of the players, who had no way out without help.

"You wouldn't expect anything less," Raccuia said. "The community rose to the occasion like they always do. It's the City of Good Neighbors. It's important to them. It's important to us. They treat the Bills and our organization like family, and it really doesn't surprise us, but I'll never take it for granted."

Offensive tackle Spencer Brown documented the help he received on social media. So too did fullback Reggie Gilliam, who on his Instagram account posted a photo of his neighbors digging him out with the words, 'City of Great Neighbors.'

Of course the team still had to get to the airport to meet their Delta charter flight, which had a tight window to take off from the Buffalo Niagara International airport.

"We thought based on the weather forecast that we had to get out before 5:30 pm," Raccuia said. "It turns out we probably would've been okay up until six, but as soon as that snow band was going to head south the airport was going to get hit again and we would've been in trouble again."

The players, coaches and staff arrived at the Air Cargo Center by bus just before 4:30 pm. After a de-icing process, the Bills took off at 5:20 pm and arrived in Detroit at 6:10.

The Bills have been adjusting all week. Five player illnesses along with injured players left them so shorthanded that they could not do team segments of practice on Wednesday. Then after the snowstorm hit, they had to cancel practice Friday and hold meetings on Zoom. The travel challenges were the latest, but it has galvanized the organization knowing that they'll be able to play the game as scheduled.

"This is one of those things in the big picture that really can bring you together," said Raccuia. "Our logistics group has probably been with each other for 20 hours over the last two days. I feel good with where people are mentally."

Raccuia and his team were already going over plans in a hotel conference room for returning players to their homes Sunday night after the game when the buses bring them back to One Bills Drive.

"We're planning the home trip now," he said. "This is much different than we normally travel. We have guys that we have to get home from the facility after the buses get us there. We know there's still going to be a driving ban when we get back in Orchard Park and Hamburg. So we have to rewind the plan at night, after the game, on a short week."

After Sunday's game against the Browns in Detroit, they'll come right back to Detroit on Thanksgiving Day four days later to play the Lions. The Bills will just have to again find a way.

Grace Heidinger contributed to this story