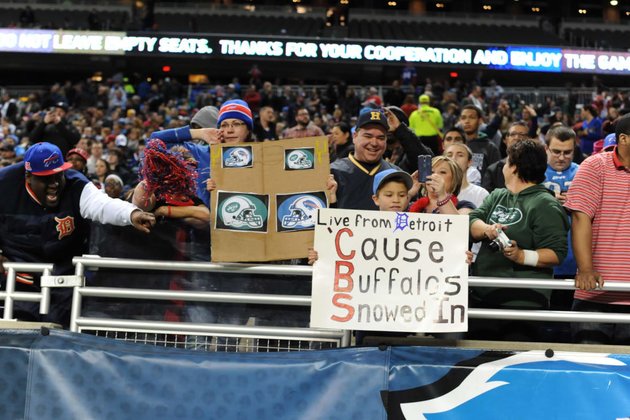 The Detroit Bills Backers are offering the option to pay to park and tailgate, and an all-inclusive tailgate in Firebird Tavern with a buffet and open bar ahead of the Bills-Browns game! The parking and bar tailgate will be in one area at 401 Monroe St where Firebird Tavern is located - just a short walk from kickoff at Ford Field.

For $70, fans who are looking to park and tailgate can park in the designated lot that opens at 8:00 a.m. Cars are allowed to stay for the duration of the game.

The Firebird Tavern Tailgate, which is connected to the parking lot, will start at 9:00 a.m. For $75, fans can enjoy a 3.5-hour open bar and an all-you-can-eat buffet, while staying warm inside in preparation for the Buffalo "home" game. This inside tailgate is a 21+ event.

*Parking and inside tailgate are separate passes. A parking pass is per car, while a Firebird tailgate tick3et is per person. If you plan to park and go inside the Tavern, you will need both passes.

In honor of the late Ralph Wilson who grew up in Detroit, the Detroit Bills Backers have teamed up with Fans of Buffalo and Gleaners Community Food Bank to host a food drive for the holiday season. The physical food drive will start on November 23 at 12 p.m. at the Bills Backer Bar, the US 12 Bar and Grill. Then around 7:00 p.m., the party will be moved to Tin Roof in downtown Detroit.

For fans who can't attend the food drive in person, there's an option to virtually make a donation by visiting here. And with the recent addition of another Bills game coming to Ford Field this Sunday, the virtual food drive is already open and accepting donations.

Fans will earn a raffle ticket for a chance to win a prize with every monetary donation made. Also, with every $1 donation, the Ford Motor Company Fund will match it to double the number of meals provided to the people of Detroit who are in need.

More information on the food drive can be found here.

Stay up to date with information regarding the events through Facebook.