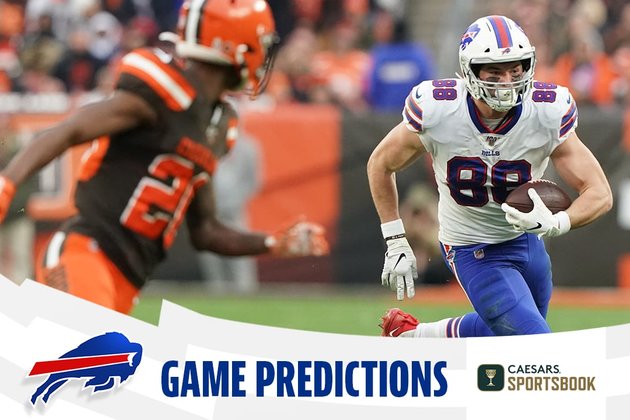 The Bills are 8.0 point favorites this week according to Caesars Sportsbook as the team prepares to face the Cleveland Browns at Ford Field in the Detroit. The game was relocated due to the snowstorm in Buffalo.

Here's a list of game predictions from NFL analysts.

The way to beat Buffalo's defense is to run on it. The Bills allow the second-longest drives in football on average, and the Browns are well equipped to move the ball. There's an assumption Buffalo will bounce back to normal this week, but this is a rare game where the Bills' defensive line could be neutralized. That said, the fact that this game has been moved to Detroit because of a storm in Buffalo might strangely helpthe Bills. Cleveland's defense is poor in any situation, but bad weather would have possibly slowed down the Bills' offense in a way the Browns can't.

If you're a Bills fan, last week's loss to the Vikings stung. But think of all the things that had to go wrong for them to blow that game. And then remember that the most important thing is Josh Allen looked healthy. The Bills are one of two teams (the Eagles are the other) that ranks in the top five in both offensive and defensive DVOA. Their three losses have come by a combined eight points. This is still a really, really good team.

Jacoby Brissett is down to his last two starts before Deshaun Watson takes over. But barring a miracle, the Browns (3-6) will not be competing for a playoff spot. Their odds to make the postseason are currently at +810, which equates to about an 11 percent chance.

It's possible that the Bills take their frustrations out on this leaky Browns defense and win by 30. But Cleveland can at least run the ball, and Buffalo is dealing with injuries. I think it'll be relatively close.

What to watch for: With a winter storm headed to western New York, the game has been moved indoors to Ford Field in Detroit, and the elements have been thrown out of the picture. But a big test still awaits a Bills defense that has shown a recent weakness against the run. Browns running back Nick Chubb leads the league with 11 rushing touchdowns and is third in rushing yards (904). The Bills' defense has allowed 145-plus rushing yards in each of the past three games. -- Alaina Getzenberg

Bold prediction: QB Josh Allen, who has struggled with turnovers all year, especially in last weekend's wild loss to Minnesota, won't throw a pick against Cleveland's beleaguered defense. The Browns have intercepted only three passes this season. -- Jake Trotter

Betting nugget: Browns coach Kevin Stefanski is 7-1 ATS as an underdog of at least 3.5 points. His largest career underdog role is 8 points in the 2020 AFC divisional playoffs at Kansas City, which he covered.

The Browns are out on the road for a second straight week after losing to Miami last week. The Bills are coming off a terrible loss to the Vikings, a game that saw them blow a 17-point lead late. They will take out that frustration on the Browns defense, which has been terrible. Look for Josh Allen to bounce back with a big day.

The Bills lost to the Vikings last week despite gaining more yards, converting more first downs, and having a higher success rate on offensive plays. In fact, the Bills had the game won - and were covering the spread - in the final seconds before a fumbled snap changed everything. The point is, that's just the way the oblong ball bounces.

Despite the loss, the Bills are still probably the best team in the N.F.L. The Browns, on the other hand, are a mixed bag. They've played some close games, they've had lost in spectacular beatdowns, and two of their three wins were blowouts. Their main weakness is their defense, which is the worst in the league against the run.

This game has been moved to Detroit because of weather concerns. That erases Buffalo's home-field advantage, but moving the game out of the "thundersnow" likely helps the Bills more than the Browns, since the Browns could have benefited from a bit of volatility.

The Browns still have two games before Deshaun Watson returns from an 11-game suspension, and they are going to be brutal. Buffalo is coming off a loss, and Josh Allen will bounce back against a Cleveland defense that was torched by Miami for 39 points and 491 yards in Week 10. The Browns won the last meeting 19-16 in Allen's second season in 2019. The Bills turn the tables.